The Ryuk group went from an email to domain wide ransomware in 29 hours and asked for over $6 million to unlock our systems. They used tools such as Cobalt Strike, AdFind, WMI, vsftpd, PowerShell, PowerView, and Rubeus to accomplish their objective.

Ryuk has been one of the most proficient ransomware gangs in the past few years, with the FBI claiming $61 million USD having been paid to the group as of February 2020. Earlier in the year, the group grew a little quiet, but that seems to have changed in the past few weeks, with incidents like what occurred at UHS hospitals.

In this case, the actions began via a loader malware known as Bazar/Kegtap. Reports indicate an email delivery via malspam, which has been creeping up in volume over the month of September.

From the initial execution of the payload, Bazar injects into various processes including explorer.exe and svchost.exe, as well as, spawning cmd.exe processes. The initial goal of this activity was to run discovery using built in Windows utilities like nltest, net group, and the 3rd party utility AdFind.

It took a few attempts, using various methods, from remote WMI, to remote service execution with PowerShell, until finally landing on Cobalt Strike beacon executable files transferred over SMB to move around the environment. From here forward, the threat actors relied on a Cobalt Strike beacon running on a domain controller as their main operations point.

After picking the most reliable method to move through the environment, the threat actor then proceeded to establish beacons across the enterprise. In preparation for their final objectives, they used PowerShell to disable Windows Defender in the environment.

The server utilized for backups in the domain was targeted first for encryption, with some further preparation completed on the host. However, once the Ryuk ransom executable was transferred over SMB from their domain controller (DC) pivot, it only took one minute to execute it.

At this point Ryuk was transferred to the rest of the hosts in the environment via SMB and executed through an RDP connection from the pivot domain controller. In total, the campaign lasted 29 hours–from initial execution of the Bazar, to domain wide ransomware. If a defender missed the first day of recon, they would have had a little over 3 hours to respond before being ransomed.

The threat actors requested 600+ bitcoins, which have a market value of around 6+ million USD.

For a full breakdown of the technical details and threat actor tactics, techniques, and procedures continue into the MITRE ATT&CK breakdown.

Initial delivery was via email with a link to the Bazar/Kegtap backdoor loader. We downloaded and ran Document-Preview.exe, which connected to 5.182.210[.]145 over 443/https.

WMI was used as well in an attempt to execute dlls laterally.

AdFind and adf.bat were dropped and run minutes after Document-Preview.exe was executed. We’ve seen adf.bat numerous times and you can read more about it here. The batch file outputs information into the following text files.

Nltest was used to check for Domain trusts

Break down of the process tree of activity from the Bazar loader on day 1. 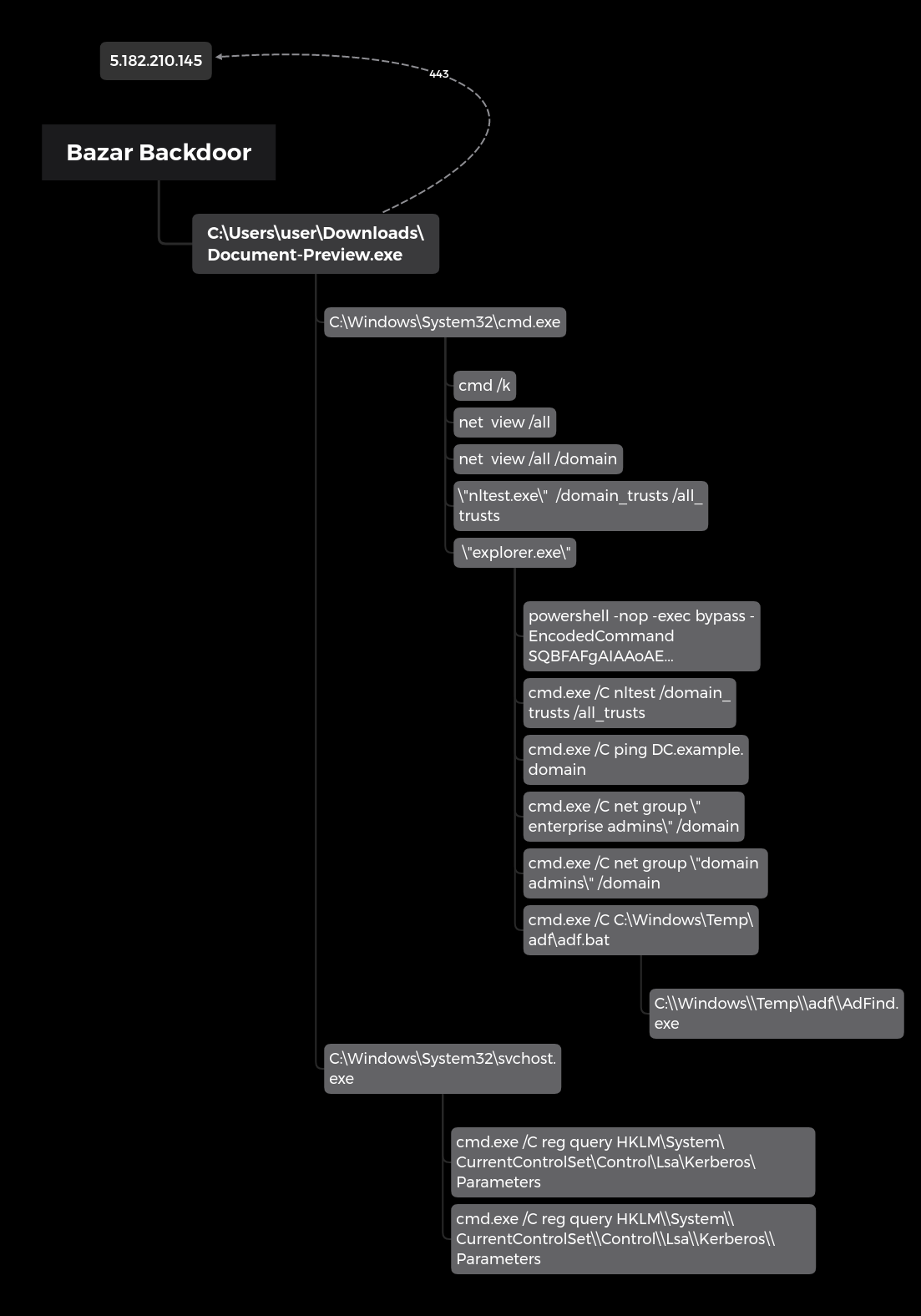 Afind was run again, and then the threat actor attempted to Kerberoast using Rubeus.

On day 1 the threat actors checked a domain controller for MS17-010 before continuing with more discovery. The system was not vulnerable to MS17-010

Lateral movement began around 28 hours after initial entry, using SMB to drop a Cobalt Strike Beacon on a domain controller. From there, the threat actor used WMIC to execute the beacon.

This payload did not appear to run successfully, as shortly after the threat actors dropped an additional payload on the beachhead host, and then executed a service on the DC, after no command and control traffic was apparent.

Following this, the treat actors copied and executed a Cobalt Strike beacon executable and initiated it via a service on the domain controller.

The threat actor was having issues running beacons on numerous systems, and on at least one of the systems, they mounted the drive remotely.

SMB was used to transfer the Ryuk executables. Then, RDP connections were made from the first compromised DC, and then, ransomware executed throughout the environment, starting with the Backup servers. On the backup server, prior to execution, the threat actors pulled up the wbadmin msc console.

Commands ran prior to ransom execution:

The threat actors asked for more than $6 million but were willing to negotiate.

Detects AdFind usage from a past case:

If you have detections you would like to add to this section, please contact us and we will credit you.