The Ryuk threat actors went from a phishing email to domain wide ransomware in 5 hours. They escalated privileges using Zerologon (CVE-2020-1472), less than 2 hours after the initial phish. They used tools such as Cobalt Strike, AdFind, WMI, and PowerShell to accomplish their objective.

Ryuk has been one of the most proficient ransomware gangs in the past few years, with the FBI claiming $61 million USD having been paid to the group as of February 2020. Earlier in the year, the group grew a little quiet, but that seems to have changed in the past few weeks, with incidents like what occurred at UHS hospitals.

In our previous Ryuk case, we saw the threat actors leverage access to an environment via the Bazar Loader malware. This time around, we saw them accomplish their objective faster, but the general tactics and techniques stayed similar between incidents.

Bazar was introduced to the environment again with the delivery via phishing emails. For an in depth breakdown on this loader, see this analysis by  Roman Marshanski & Vitali Kremez. Bazar, once running, was seen again injecting into explorer.exe, svchost.exe, and spawning command shell processes.

From this loader we saw initial mapping of the domain, using built-in windows utilities such as Nltest. However, unlike the last case, the threat actors started at a lower privileged user and rather than proceed slowly or cautiously, they exploited the recently disclosed Zerologon vulnerability (CVE-2020-1472) to reset the machine password of the primary domain controller.

Lateral movement was initiated via SMB file transfers and WMI executions of Cobalt Strike Beacons. The network indicators align similarly to the prior campaign and were noted by Kyle Ehmke in response to our last post pivoting off the prior report’s intel. From memory analysis, we were also able to conclude the actors were using a trial version of Cobalt Strike with the EICAR string present in the network configuration for the beacon. Both portable executable and DLL beacons were used.

Once on the main domain controller, another Cobalt Strike beacon was dropped and executed. Then more domain reconnaissance was performed using AdFind. Once this completed, at the four hour mark, the threat actors were ready for their final objective.

Four hours and 10 minutes in, the threat actors used the pivot from the primary domain controller to RDP into the Backup server. Backup servers were again targeted first for deployment of the ransomware executable, followed by servers and then workstations.The threat actors finished their objective by executing the ransomware on the primary domain controller, and at the 5 hour mark, the attack completed.

While last time we commented on the lead time between the first and second day to aid detection and response activity, this case goes to show that you can’t count on that kind of timescale. You need to be ready to act in less than an hour, to make sure you can effectively disrupt the threat actor.

Access was initiated by a phishing email leading to the Bazar Loader malware executable.

Bazar relies on user execution of an executable to run. This user was a Domain User and did not have any other permissions.

CVE-2020-1472 was used to reset the credentials on one of the domain controllers in the environment. After resetting the password, the threat actors then targeted a different domain controller, potentially due to breaking services by use of their exploit.

On one of the domain controllers we saw use of the Cobalt Strike named pipe escalation.

On the first domain controller that the treat actors connected to after their initial connection, they dropped a DLL and executed it via rundll32.

Dropped via RDP and executed via rundll32 on the second domain controller.

Shortly after, the DLL was called again via regsrv32.

Then a 2nd DLL was dropped and executed in a similar manner on the 2nd DC.

Ran on the beachhead.

Ran on a domain controller.

Then they imported the PowerShell Active Directory module.

They then ran the following looking for host names, operating systems and last logon dates of all AD systems.

After already completing the above discovery work and having already pivoted to their 2nd domain controller, the threat actors moved on to AdFind for further domain reconnaissance.

Contents of the script ran the following with AdFind.
The threat actor then ran this command a few times.

The first lateral movement occurred to the domain controller not affected by the use of CVE-2020-1472. An executable was transferred to it via SMB using a domain administrator account.

After transferring the exe, the threat actors utilized WMI from the beachhead host to execute the file.

The presence of the EICAR strings point to the Cobalt Strike software being used as a trial version.

They accessed the GPO’s for the domain but none were modified or added.

Shortly there after we saw a Cobalt Strike DLL transferred via the RDP connection.

RDP was used to pivot from the main domain controller and distribute the final ransomware payload enterprise wide.

After our previous report, @kyleehmke pivoted off of our prior Ryuk report and used the network data to link several of these domains which we saw in this case.

Starting around 4.5 hours after the initial Bazar malware was executed, the Ryuk threat actors acted on their final objectives and initiated RDP connections from the domain controller previously exploited, to the rest of the environment. This time they initiated the ransomware first on the secondary domain controller (their 1st pivot) and transferred the Ryuk executable over the RDP connection. 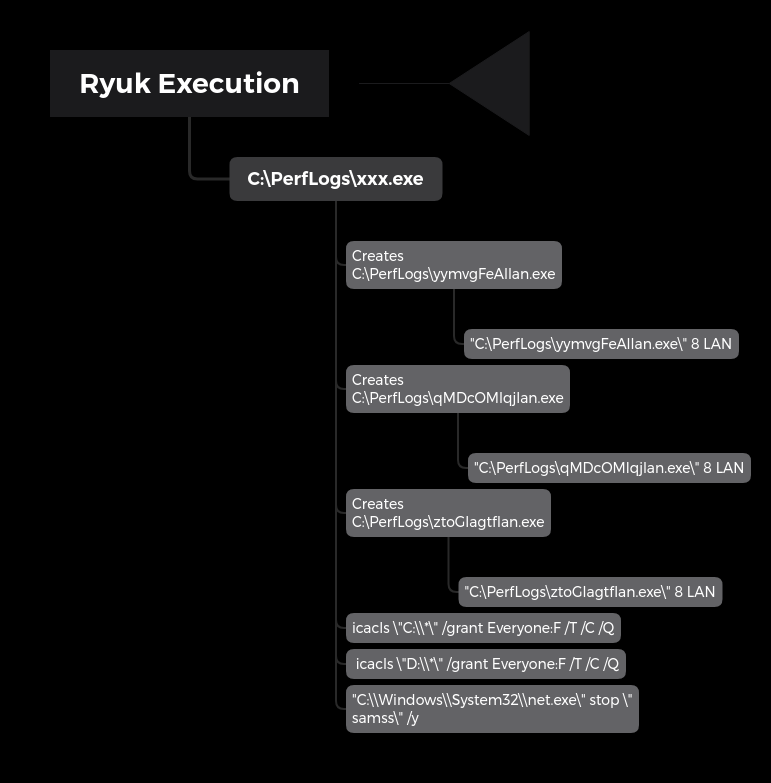 Detects AdFind usage from a past case:

If you have detections you would like to add to this section, please contact us and we will credit you.